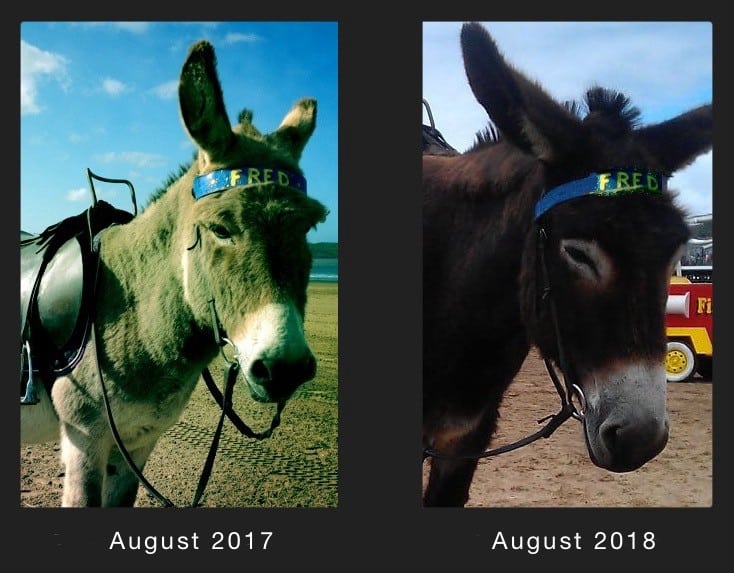 Never return to a place where once you knew happiness. Only disappointment awaits you, because, according to Heraclitus, you can’t step in the same river twice.

It’s a piece of advice I would have done well to observe, but, no, I didn’t listen, did I?

As the summer this year moved towards its close, I decided to go back to Weston-Super-Mare and see how my old friend Fred the Donkey was doing.

I first met him last year on the beach at Weston-Super-Mare, as I made a cycling trip along the Devon coast. Fred whinnied with joy when he first saw me and cantered gaily across the sand to press a warm, wet muzzle of friendship into the palm of my hand.

A deep and abiding friendship between donkey and man was forged that week. And though I left Weston-Super-Mare, Fred never left my heart.

So this year, on a whim, I jumped on the train and decided to go back and see him. Would he remember? Would he whinny with joy again?

No, because Fred had changed colour.

Did you dye your fur?

Or is the truth much darker?

Was Fred, as the Cockney rhyming slang would have it, ‘brown bread’?

Did he die during the cold winter that passed, and was his bridle passed on to whichever donkey happened to be standing next in the queue?

Or is the truth crueller still? Is it possible there never was a Fred? Just a bridle with the name written on it? A simple halter that got handed out every morning without any regard to which donkey received it? Today Fred was the black one, tomorrow the grey, and the day after the brown?

The essence of Fredness residing in the bridle and not the donkey?

Fred’s example haunts me and makes me reflect upon the phantom nature of my own existence.

What actually binds our identity from moment to moment? What is the string upon which we thread the beads of our successive selves? Is it just the string of memory? But memory fades. Is the me that wakes in the morning the same as the one that went to bed?

What is it that connects the me today with the one who played at the seaside 50 years ago?

Am I like the famous Ship of Theseus in which every plank was replaced one by one, until not a single plank of the original ship remained? Just as every cell in my body gets replaced every seven years?

Are we not all donkeys in this respect? We each wear a bridle for a day, canter up and down the beach whinnying with joy, while God stands behind the van in the rain smoking a crafty cigarette.

I think Fred was, in fact, trying to tell me a beautiful and comforting truth in his own cock-eared donkey way.

Hooray for Fred. My friend.