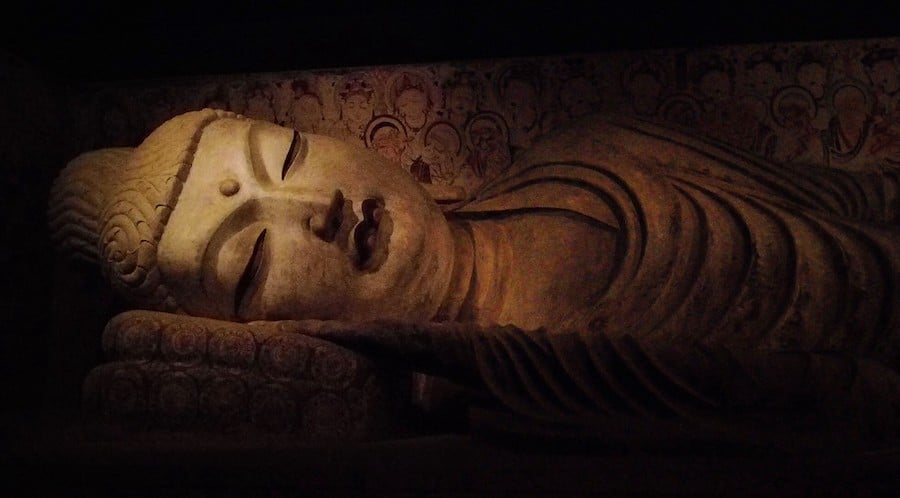 It was around the end of the last century that I embarked on my journey to the East in pursuit of spiritual enlightenment.

I had been told I should present myself at the gates of a Zen monastery in Japan and there prostrate myself. The monks, they said, would then pick me up and throw me out. This would be the prelude to a year of severe privation intended to break the spirit of any postulant monk and make him run home to his mummy.

It sounded good, but alas, as a member of the godless fraternity of admen, this route was closed to me.

Apparently, if the monks find out you work in advertising they beat you with sticks.

All the same, I achieved the spiritual enlightenment known as Nirvana by a different route, of writing advertising copy for Singapore Airlines.

Which is to say, for three years I served as an altar boy at the Church of the Holy Singapore Girl. This may sound rather strange to the uninitiated, but anybody who has worked on the Singapore Airlines account will understand exactly what I mean.

The account was handled by Batey Ads, out of a shophouse in Singapore’s Chinatown. The creative department housed in a separate, cloistered wing away from the hurly-burly. Here the Singapore Girl was always referred to, in hushed tones, as ‘The Girl’. Her image accorded a degree of reverence more befitting a religious icon than a commercial one.

In the Zen monastery the monk spends his first year cleaning and sweeping, and performing other menial tasks in accordance with the mantra:

In Singapore I didn’t chop wood or fetch water. I spent my first year writing the foreword to the inflight menu. You may wonder, Who reads the foreword to a menu? And the answer is, of course, nobody. And performance of such a supremely pointless act is a vital part of the training, which entails grinding away the egoic Self.

This refers to the little voice in the head with which we falsely identify, and which according to the Buddha is the source of our suffering.

At the end of his first year in the Temple, the postulant Zen monk is given a kōan, which is an insoluble riddle to meditate upon. The aim is to subvert the channels of logic and intellect and arrive at insight into the truths of this world that cannot be articulated in language.

The most well-known kōan in the West is, What is the sound of one hand clapping?

As a copywriter on Singapore Airlines, after making suitable inroads on the egoic Self writing menu copy, you too were given a kōan.

What is the name of economy class?

You might think the answer is obvious, but I spent three years trying to find out.

They told me the airline was undergoing a multi-million dollar refit, with smart new liveries for the cabin interiors, along with numerous other changes. Underpinning it all would be a new name for economy class. A bottle of champagne for the person who came up with the best name.

I laughed, because it was easy. The brief was straightforward: the name had to hint at Asian heritage whilst at the same time being sort of international and aspirational.

The answer was obvious. Jade Class. I wrote it down and sent it off and looked forward to receiving my bottle of champagne.

The following week I was called to a meeting to discuss this project and it turned out that it had already been underway for a year, during which time they had suggested over five thousand names, none of which had been to the liking of Singapore Airlines.

Thus began the spiritual mortification which was a prelude to enlightenment. Every week I was required to submit thirty names.

I started with some flowers. Hyacinth Class, Jasmine Class, Orchid Class, Hibiscus Class, Dandelion Class etc. These were duly rejected and I moved on to precious stones.

I quickly discovered the copywriter’s friend, those little Collins Gem books that list names for just about every subject under the sun.

Slowly the seasons past and the year turned. I metaphorically washed the floor and swept the temple compound every day.

I duly worked my way through all the words in the English language. And in my spare time I learned the trade of writing ads for Singapore Airlines.

The rules were simple. Send the girl to a faraway location served by the airline. Shoot her being nice and interacting with locals through a lens heavily smeared with Vaseline. Bathe everything in golden light.

Today there would be a hashtag against it. And even in the Nineties there was criticism from the feminist lobby.

But enormous pains were taken to make sure that she was never tainted with the slightest suspicion of being a sexual creature.

In the commercials no man between the ages of 16 and 60 was allowed to go near her.

Touching her was largely off-limits.

In fact there were only three safe activities she could perform:

React with surprised delight when somebody put a hat on her, or took it off.

Or (my favourite) stand on the summit of a sand dune, holding the hand of a child, and launch a toy plane into the pellucid blue sky.

Music was a Heavenly choir singing, Who are you Singapore Girl?

The philosophy behind all this was contained in a plaque on the wall in reception in which agency founder Ian Batey had stated the aim of advertising was to ‘tickle the toes’.

I roundly mocked him for this. What a fool! I thought. What did he know about advertising?

In those days I knew it all. Or thought I did.

I knew, for example, that advertising is all about being clever, being a smart ass, using sophisticated jokes and clever puns such as ‘The best things in life are Brie.’

As Bob Dylan once said, ‘Ah, I was so much older then, I’m younger than that now.’

Even so, as the three years passed, a slow spiritual transformation, like a lotus bud opening, was taking place inside me. Unobserved, unnoticed, unsuspected. I began to lose these early certainties.

And I continued to submit my thirty words every Monday.

Initially I took pains to make the words somehow relevant and applicable to describing the experience of flying economy class on Singapore Airlines. But after a while I totally relinquished the goal. All that mattered was the supply of words, any words. Like the fireman on a steam train shoveling coal into the firebox, I shoveled words into the insatiable maw of the Singapore Airlines account.

By the end of the first year I had worked through all the world’s dictionaries and encyclopaedias and was trawling through the works of an obscure 19th-century anthropologist. He specialized in journeying to remote places to bring back lists of words from languages on the brink of extinction.

Midway through the second year a sombre mood took possession of my heart as it became clear that I was approaching the end of all possible words in the English language. It was the linguistic equivalent of the heat death of the universe.

What should I do?

The terrible fate was narrowly averted at the eleventh hour when Singapore Airlines told me to make up words.

And so I entered my third year mindlessly generating combinations of mellifluous and euphonious syllables. Such as:

What is the sound of one copywriter weeping?

By the middle of the third year Singapore airlines — having rejected every word in the languages of Earth, and most of the made-up ones — lost patience and appointed an outside branding consultancy at a cost of many tens of thousands of dollars.

After a month they cracked it. The new name for Singapore Airlines economy class would be Sayanna Class. Apparently, a mixture of Sanskrit and Martian.

The torture came to an end. Or so I thought.

Discussing the matter over lunch with my art director, Khai, I noticed he looked worried.

So it means, ‘Dead People Class?’

‘What do you think?’

So Khai called a contact at the airline and the world’s greatest PR disaster was narrowly avoided.

At this point my time at the temple came to an end and it was time for me to leave Singapore.

I booked a ticket to London and enjoyed a final beer in the bar of Changi Airport.

It was then that I had my epiphany. My moment of revelation when the kōan revealed its bliss-bestowing truth.

I reflected on the words of Ian Batey, that the aim of advertising was to tickle the toes, and it struck me that that he had been right all along.

I saw that all those clever ads and puns and jokes I delighted in flew right over the head of the average viewer. They didn’t touch the heart at all. Whereas those simple little cameos of the Singapore Girl smiling in a Vaseline-smeared world of golden sunlight had a singular quality and strength: they were charming. And without actually saying anything or making any point, they touched the heart and filled you with a warm feeling inside.

Giving someone a nice warm feeling towards your brand is a pretty fine achievement. What more could you want?

Suddenly it all made sense. I drank my beer with a deep sense of spiritual satisfaction and reflected on the genius of the new name for economy class that had been announced to coincide with my departure.

They decided to call it…

An Idea (by Ingenious Piece)

Everything Begins With An Idea