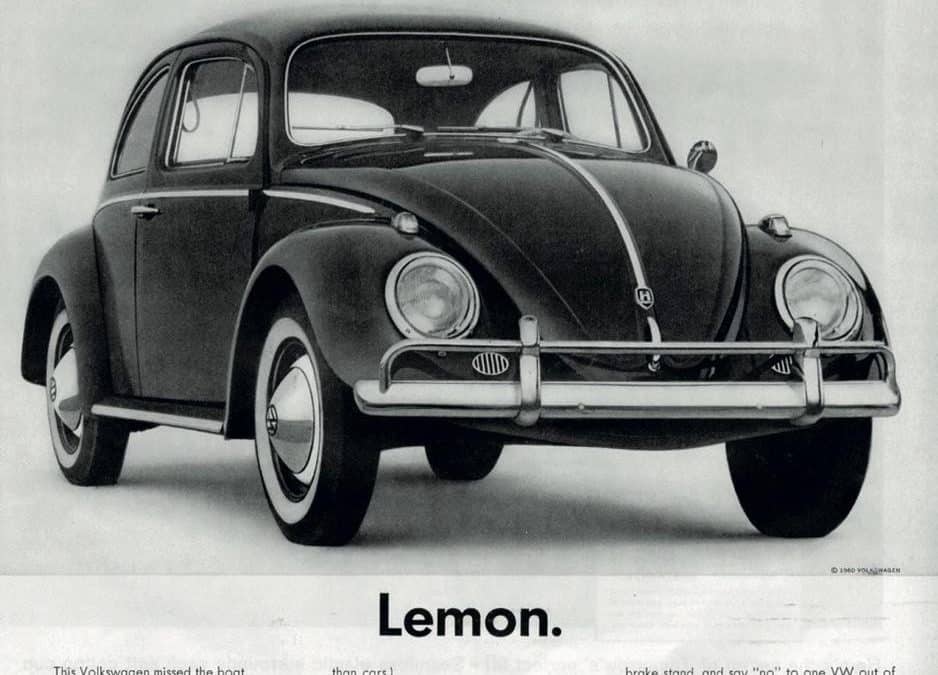 Every creative writing course worth its salt will urge you to ‘show don’t tell’.

But you would be hard-pressed to find a better demonstration of the concept than this old advertisement for Volkswagen, which appeared in 1959.

At the heart of the ‘show don’t tell’ mantra is the old pop science concept of left and right brain.

When you tell someone something, you engage the rational, reasoning right-hand side of the brain. When you show them, you use storytelling to inveigle your message past the guard dogs of logic.

If you tell someone something, four things happen:

So instead of giving you some information about the product, this ad approaches the problem by a circuitous route. It starts off by saying, the product is no good. A lemon.

Already logic has flown out of the window because this is unheard of for a car manufacturer to spend all that money telling you in an advertisement that their product is no good.

You don’t believe them.

It’s a tribute to human cantankerousness. If they tell you the car is good, you don’t believe them. The little voice in your head says, ‘You are the manufacturer, of course you are going to say it’s good.’

But then when they tell you it is bad, you still don’t believe you! ‘Ha!’ says the voice, ‘I’m not falling for that old…huh? What do you mean it’s a lemon? You’re the manufacturer…’ Something is not right here .The reader stops and pauses, and wonders.

And lo! You find yourself ensnared in a story. About Kurt Kroner, a geeky, anal-retentive nit-picker from Wolfsburg, Germany, who worked in their quality control department.

A bit of a nerd with sticky tape wrapped round the bridge of his spectacles. He sought no glory or limelight. Too shy to have a girlfriend, he spent his teenage evenings in his tiny bedroom building model steam engines out of old tin cans, and dreaming of one day wearing one of those fishbowl helmets that comic book space heroes wore.

Or perhaps in his more realistic moments, saw himself wearing a white coat with a leaky pen in the breast pocket working late at the local rocket factory.

(By the way, none of this biographical information is actually in the ad, but it is so beautifully written I feel as if I’ve lived next door to him all my life.)

Kurt Kroner was never the sort of person you would want to be stuck in an elevator with, or sitting next to at a dinner party. But you should nonetheless be grateful to him.

He changed history and ushered in a revolution in advertising that saved the human race from being bored to death by dull ads.

According to the copy set under the Lemon ad, he was one of the 3,389 quality control inspectors working at the VW Wolfsburg plant. He it was who noticed the chrome strip on the glove compartment was blemished and had to be replaced. And thus was born the ad.

As you read, your funny bone gets tickled by the slight absurdity of it all. You absorb a message, but by a beautiful paradox the message you take out is the opposite to the one they explicitly state. They call their car a lemon but you deduce from having read the story that their other cars must be pretty damn good, especially as they apparently have 3,389 other anal-retentive nit-pickers working alongside Kurt. That’s more inspectors than cars, they tell you, and you nod in admiration.

As you read, the storyteller picks your emotional pocket, but instead of taking something out, it slips something in. The sales message.

As with the best pickpockets, you don’t even notice.

You never give it a second’s thought until a month later at a dinner party someone mentions one of these quirky new VW Bugs. You stop your soup spoon midway between bowl and your chin, and say knowledgeably, ‘Oh yes, they have amazing quality control. More inspectors than cars.’

If you stopped to think about it, you might realise this isn’t as wonderful as it sounds. A car is a big item with thousands of things that need to be checked. One person per car is not all that much.

But the thought never occurs to you. You’ve had your emotional pocket picked, and — as with the best pick-pockets — you didn’t even notice.