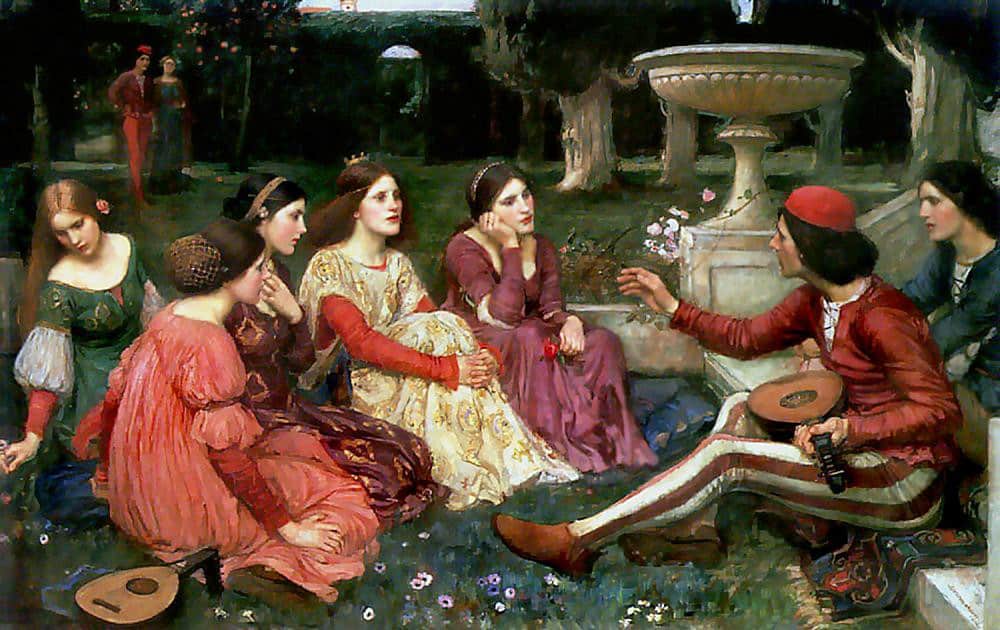 ‘Yes?’ he said, inspecting me through rheum-filled eyes.

‘The Corpse-washer.’ I held up the advertisement in the Siena and North Tuscany Chronicle. ‘It says that in return for washing corpses, you will teach me to write a best-selling novel.’

‘Oh yes, of course! Come in!’ The Blessed Saint Bernadine of Siena opened the door. ‘We didn’t expect anyone to apply. This is a plague hospital. All the others died before they could write the first chapter. Come this way.’

He took me down a long corridor of stone flags worn smooth by the feet of a thousand long-vanished monks — the usual deal.

‘So when do I start? Washing corpses.’

‘You really know how to write a bestseller?’

‘We sure do! We have the secret formula — it was bequeathed to us by the great Boccaccio. He called it his secret sauce.’

We turned left at the end and climbed some stone stairs. The place stank of death. No surprise there. The Blessed Saint Bernadine of Siena ushered me through a door leading onto another corridor. ‘Tell me about your novel,’ he said. ‘Give me your Vatican Bathroom Pitch.’

The elevator pitch in the days before before elevators

He stopped and turned to me, placing a fraternal arm on my shoulder. ‘Imagine you were invited to the Vatican and had to use the bathroom. While you are in there, the archbishop of Milan comes and stands in the next stall. He asks you, “What’s your novel about?” This guy is an important man; he’s got connections in publishing; he can make things happen. You’ve got only a handful of seconds; you need to give him your Bathroom Pitch, and pronto, which is to say, a concise, catchy summation of your idea, presented in such a way that he instantly wants to read your novel.’

‘Oh, you mean the elevator pitch.’

‘We’re not big on elevators in the 15th century. But everyone has to go to the bathroom. The point is, this is probably the most important part of your whole novel.’

‘Absolutely. This is how you will sell it to your agent. This is how they will sell it to the publishers and how readers will sell it to their friends. Word of mouth, my young friend, word of mouth. But more importantly, if you can’t say in a short paragraph something about your novel that makes me want to read it, you haven’t thought the whole thing through deeply enough. Trust me on that. You could spend two years of your life on a project that was misbegotten from the start. But if you get it right, everything else falls into place.’

We arrived at a chamber set off the corridor.

‘This is the R&D lab,’ he said. This is where we are researching the latest cures. We have two. A fragment of the Virgin Mary’s girdle and a nail from the Cross of Jesus.’

‘Nail from the Cross? How does that work?’

There was an awkward silence. The Blessed Saint Bernadine of Siena’s sense of failure hung heavy in the air.

‘I think it’s wonderful what you are doing here,’ I said, trying to cheer him up.

He led me to the refectory. It had high, stone-vaulted ceilings and long wooden benches. A handful of monks sat and dined in solitude. From afar came the chanting of male voices interspersed with the groans of the dying.

The Blessed Saint Bernadine of Siena called a minion over and ordered two pizzas. Quattro Formaggi.

How to write a bestseller

He explained the secret to writing a page-turner. ‘Here at Santa Maria Della Scala we call it the WACSS approach. It stands for World, Approach, Character and Secret Sauce. These are the key components of your premise, so to make it sing, we take each in turn and see if we can dial it up.’

‘You know, make your idea sharper, stranger, weirder, funnier…whatever. Spin it. Give it attitude. Audacity. Anything to give your idea more…more…more hooka — palooka.’

‘It’s Latin. Take your idea, for example…what was it again?’

‘It’s about a holy man, an ascetic called Symeon the Stylite, do you know about him?’

‘You mean the fruitcake who spent 37 years sitting on top of a tall column of stone?’

‘That’s right, although I don’t think he was a fruitcake. He was a very holy man.’

‘So what does your stylite do?’

‘’He lives on top of a column of stone for 37 years and then dies.’

‘What happens during the 37 years?’

‘Why would anyone want to read that?’

The Blessed Saint Bernadine of Siena poured a jug of water into our glasses. ‘My friend,’ he said. ‘I’m not going to sugar-coat this. Your idea stinks. No one is going to read that.’

‘Because it’s not commercial.’

‘I’m not interested in being commercial; this is a work of art embodying urgent, vital truths about…about….’

‘I know, I know,’ said The Blessed Saint Bernadine of Siena. ‘One of those books that the literary reviews call vital, spare, taut and bruising.’ He rolled his eyes. ‘Listen, my friend. What you have described is a literary novel. No one reads them. We will teach you to write a bestseller: a deeply satisfying, page-turnable piece of magic based around a crackerjack Vatican Bathroom Pitch. We’ll take each element in turn and look for ways to dial it up. Then when we think we have something we can use, we will research it.’

‘In the public square tonight. I do this thing, you see, called Bonfire of the Vanities. You should come and watch.’

The Bonfire of the Vanities

‘I build a pyre and then get the mob to throw things on it. Principally mirrors, high-heeled shoes, perfumes, locks of false hair, cards, dice, and chessmen. Then we burn them. That’s just the hors d’oeuvre. Once we get them all wound up, I start inveighing.’

‘Yes, I inveigh against things, like, gambling, witchcraft, adultery, incest, sodomy, infanticide, and usury — stuff like that. Then the mob inveighs against them too. It’s quite a sight.’

‘I thought they liked those things.’

‘Oh, they do! But they can’t admit it. We’ll take your concept and run it past them and then suggest some improvements, see what they think.’

The crowd booed and shouted out, ‘Boring!’

‘Tell me about his world; where is it set?’

‘I thought maybe the 15th century; you know a plague so terrible the dogs were digging up the dead to eat, stuff like that.’

Someone in the crowd shouted out: ‘Make him a space traveler!’

‘Yes,’ said the Blessed Saint Bernadine of Siena. ‘I like the sound of that.’

‘How can you have a space traveler in the 15th century?’

‘This is science fiction,’ he explained. The crowd roared its approval. ‘He’s from…oh I don’t know, name your favorite star.’

‘He’s from Betelgeuse IV. Traveling to earth for…for… he needs an exciting goal, some object of his quest. Like a Maltese Falcon, or the Secret Formula, or elixir, or…’

Someone from the crowd shouted out, ‘The Holy Grail!’

‘You mean like an Arthurian romance?’ I asked in disbelief.

Someone in the crowd shouted out, ‘Jejune!’ The cry was taken up by the rest of the crowd, all chanting, ‘Jejune.’

‘They don’t like Arthurian Romance,’ said Saint Bernadine. ‘It’s old hat. Tell you what, how about the original Holy Grail? The cup that the disciples drank from at the Last Supper?’

‘This is crazy,’ I protested. ‘What does this foul-smelling mob know about literature?’

‘This foul-smelling mob is your market. Don’t be such a cocksure know-it-all. We’ll make him a time-traveling spaceman from Betelgeuse. Now, what does he want? Your hero needs a goal.’

The crowd roared their approval.

Someone from the crowd cried out, ‘He falls in love.’

The crowd roared. Someone from the back shouted, ‘With a prostitute!’

The crowd liked it.

‘Lose the column!’ shouted someone else in the crowd.

‘Hell yeah!’ said the Blessed St. Bernadine of Siena. ‘Do you need the column?’

‘Of course, that’s the whole idea!’

‘It’s a cliche,’ he said. ‘We’ve got people squatting on columns coming out of our ears. Get rid of the column, put some sex in it, give it a bit more love, and bingo! You’ve got a bestseller.’

So I did. And that was how I came to write Calvary Girls Are Easy.